The Most Common Camera-Trap Visitor Is. . . 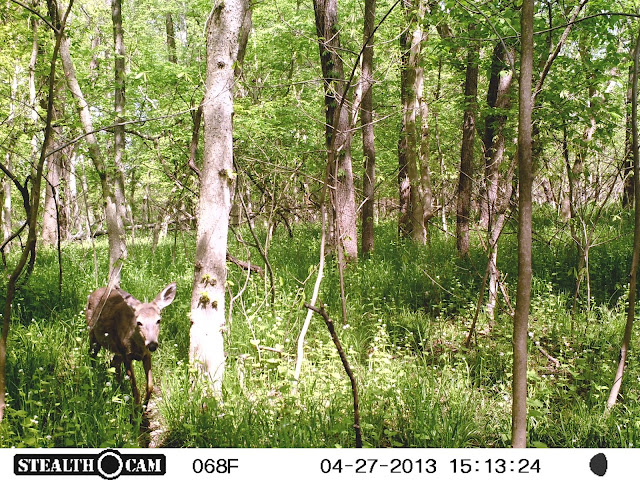 Other animals can't even come close to showing up in numbers comparable to deer.

I have known this fact since I started doing this, but today I crunched some numbers to get exact percentages of deer having their pictures taken by my cams.

It took some time to organize thousands of pictures into files and folders, but the time I spent doing this offered a good break from studying for my looming final exams that I have been spending a ridiculous amount of time on in the past week.

The results below omit videos, pictures of me taken by the cameras, false camera triggers, and test pictures.

White-tailed deer hold the record for most camera-trap images taken at a staggering 52% of total images of animals.

Raccoons can't even catch up, but hold steady in second place by appearing in 29% of my pics.

Foxes come in third place and have shown up in 12% of my pics.

All other animals shown on this blog make up for the 7% that is in my collective category of fourth place.

What makes deer have such a greater number of camera appearances is based on a whole combination of factors.

First of all, deer are very numerous in northern Virginia, so it shouldn't come as a surprise to see them so often.

Deer also frequently travel in pairs or small groups.  If a camera triggers where there are multiple deer (as the cameras often do), the deer appearance rate goes up significantly since I account for multiple individuals of the same species in these statistics.  Deer also travel in both day and night and aren't as camera shy as many other animals are.

Deer live alongside humans in many areas of northern Virginia.  Seeing a camera in the woods does not seem to bother deer at all, since they are so used to human-made objects anyway. 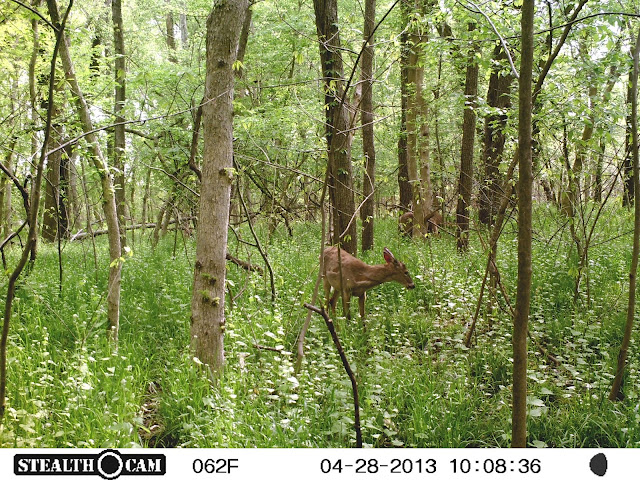 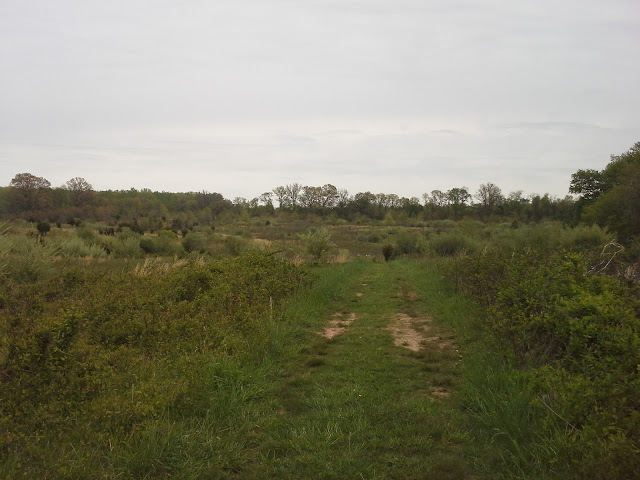 When walking, cam-trapping, or while doing basically any outdoor activity, I frequently use the word "textbook", followed by another phrase.

To me, this accurately describes an outdoor situation that someone would read about in a textbook.  For example, I always say,  "textbook bass fishing", when I catch a bass behind large rocks on a warm day, when the river is beginning to rise.

"Textbook snake grounds", is when I find a water snake basking on rocks right next to the river on a sunny day.

The picture above accurately depicts the scenery of something that I have deemed to be a perfect example of "Textbook Coyote Territory".

The meadow shown is perfect hunting grounds for a coyote that will consume rabbits, rats, squirrels, mice, voles, and even birds.  It's a very large meadow that I have the privilege of working on and researching what animals are present in the area.

Ponds, forests, and more meadows are in the immediate area, providing coyotes and other carnivores (such as foxes), with opportunities to den, mate, hunt, and live throughout the year.

As far as coyote territories get around here, it can't get too much better than this.

It is the same meadow that surrounds a coyote den that I took a picture of in Tracking Your Loudoun Coyotes and is very close to the area of another previous post, Busy Days.

Posted by Unknown at 9:59 PM No comments: 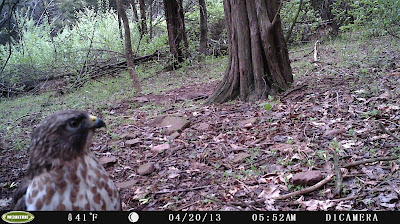 Two cameras are set up by this fox den which I have posted about before.  These cameras STILL have not provided any pictures of kits, so I'll have to be even more patient with this set.

Foxes, groundhogs, and squirrels are very common visitors here, but two pictures of another animal stuck out to me while checking the cams.

It paused here for just enough time to have two pictures taken of it.  I think it enjoys the company of a camera in the woods, because I can't think of many reason of why else it came down here.

Maybe it's a coincidence, to eat, to check out the camera, or just to rest on the ground.  Who knows!

Just another mystery in the woods. 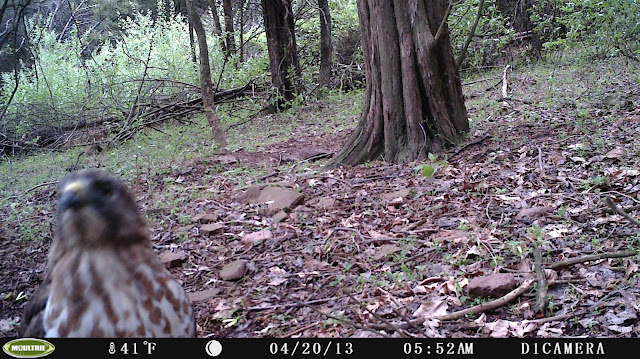 Another bear came by to say hello to one of my cameras.  It's a young one, as you may be able to tell by its small size.

This camera set comes from Bluemont, Virginia and was the one that I put up in a previous post (Into the Appalachians). 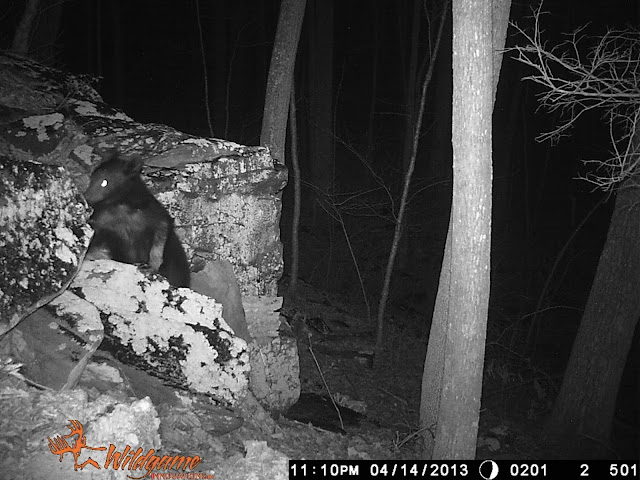 Now here is where I'm going to get a little analytical with these photos.

This bear had its picture taken at 11:10PM on April 14th.  The bears in my last post (Loudoun County Bears) had their pictures taken on the same date at just about exactly the same time.

I am estimating the populations of these animals by looking at the times of the pictures and how far away the cameras are from other cameras.

These bears cannot be the same bears since the cameras are miles apart from each other with a picture at the same time.

Loudoun County has way more bears than I ever would have thought.
Posted by Unknown at 12:44 PM 12 comments:

There are few things that excite me more than these pictures.  In fact, I'm so excited that I can barely even get words out so I'll make the writing in this post quick and easy.

Bears.  They are on the move in Leesburg, Virginia.  This camera was set up in Banshee Reeks Nature Preserve where I have been doing coyote and fox research.

Bluebells.  A sort of hidden icon for northern Virginia.

I say hidden because it seems like many residents here do not know they are around in mass quantities.

In a few locations, they are sparse, but in other places, they blanket the bottom of the forest.

I hope everyone enjoys these photos as much as I enjoyed seeing these flowers in person.  I even found some rarer colors of bluebells.

These were of the white variety and a pink variety. 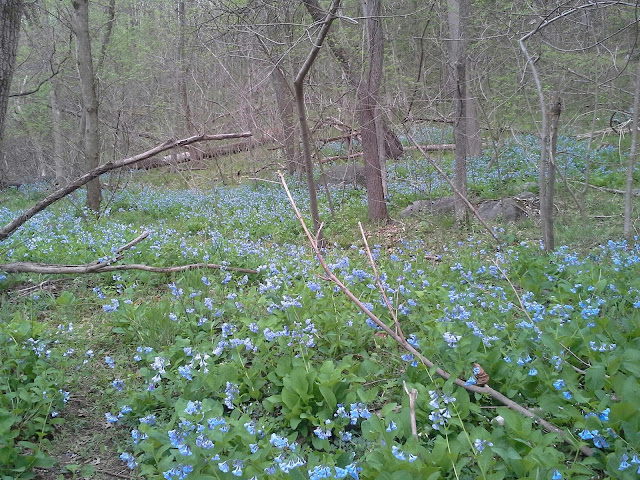 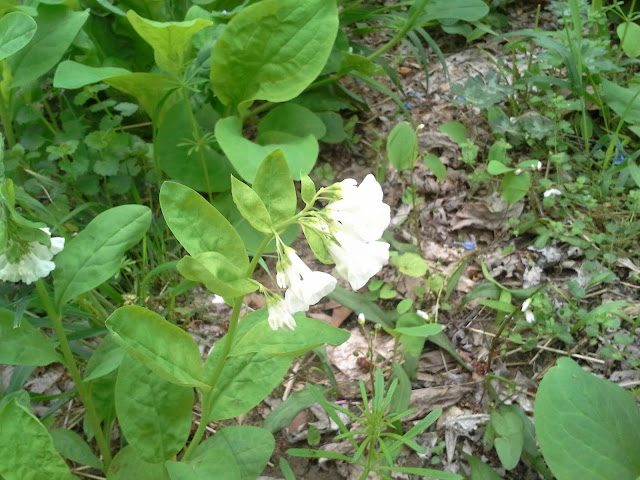 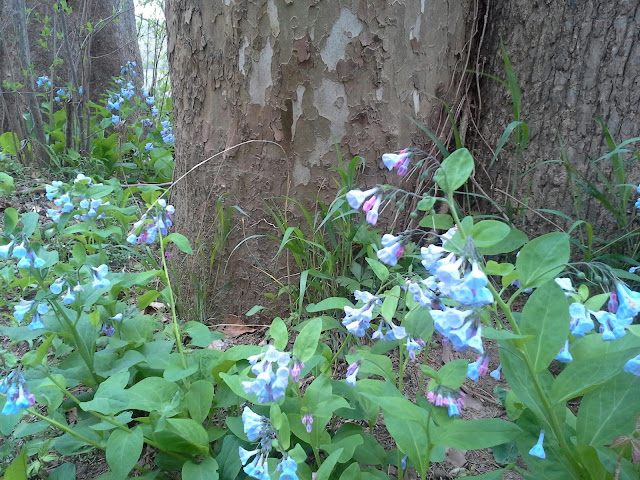 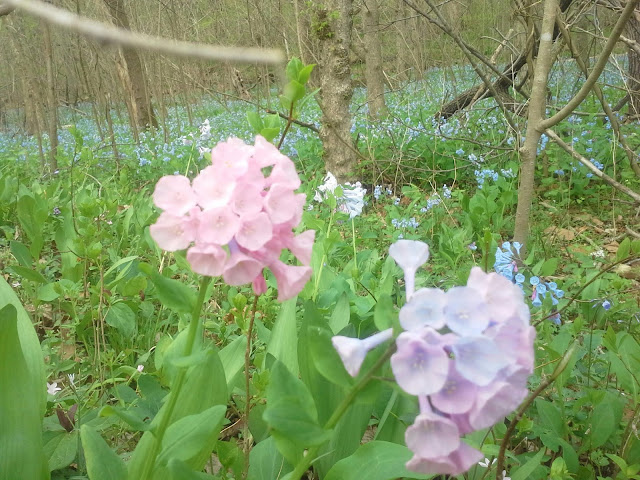 Posted by Unknown at 5:01 PM No comments:


This is the turkey that I mentioned in my last post (Another Fox Meal).

It walked right in front the camera without seeming to care at all.

That's the great thing about using camera traps (trail cameras, game cameras) for research surveys of animals. Animals seem to care less if there is an unmanned camera around, than they would have if a person was standing there

Camera traps offer a way to view wildlife in ways that we wouldn't see if a person was present.
If a human was around, animals would be even more wary and scared.

All in all, it was just another day in the great outdoors for this gobbler.

Posted by Unknown at 9:05 PM No comments:

Today was another one of those busy camera trapping days.  I've got so many cameras under my control that it is beginning to get difficult to remember where exactly they are.  No fear though, I've got the locations of all of them drawn on maps, on a piece of paper, in my phone's GPS, and on my computer.

I put this camera on a popular game trail in Leesburg, Va.  It is a trail that leads to one of the fox dens I have another camera at.

A fox appeared of course, and was carrying a large meal.  A muskrat was in its mouth, being dragged towards the den.

Muskrats are supposedly plentiful in this area, as Goose Creek is very close.  Goose Creek is a small river flowing in Loudoun County.  It is a tributary of the Potomac River, which flows past D.C. and empties into the Chesapeake Bay.

This camera had other visitors, including a skunk, deer, another fox, squirrels, and a single wild turkey.

Other good news is that I now have permission to camera-trap in Alexandria, Virginia on a very large piece of property.

I still have to decide if I will be able to make the drive down there once a month or so now since I have cameras in so many towns around here already.

The Appalachian Trail (AT) was calling my name today.  After finishing class for the day, I donned my boots and hiking gaiters, packed up a camera and gear, and set out to drive west.   The mountains and hills of Loudoun and Clarke County, Virginia were welcomed sights on a warm, spring day.

I set out for a short hike on the AT near Bear's Den.  Bear's Den is a sort of pit-stop for AT hikers and contains a few miles of rollercoaster-like trail conditions.

I trekked towards another piece of property that I am very familiar with out there (which I will keep a secret for now) to set up one of my cameras.

The camera here is set a few feet off the ground, well off the actual footpath of the Appalachian Trail, but still in the same area that I know as, Bluemont, Virginia.

A garter snake came out of its rocky housing to see what my noise was all about and stayed around for a minute or two.


I continued hiking for a few more minutes into a small stream where skunk cabbage was popping out of the ground.

Here is where I conversed with a group of young, "9-to-5-Charlies", that decided to leave the office for a 4 day weekend on the trail.

We did the obligatory, "Hey, how are you?", and the typical, "Where ya headed?", as if nobody had ever asked us these same questions while on the Appalachian Trail.

What was different about this time though, is that I asked them if they've heard any coyotes lately on the trail while sleeping at night.

Their response,  "Of course! Almost every night".  I smiled, nodded, and wished them well on the rest of their hike.

It may take me some time to come back to this location, as it is an hours drive away.  I'll go back there in a couple weeks with some fresh camera batteries and a heart full of camera-trapping hope.