I've been busy, really busy.  Schoolwork, homework, studying, work, and volunteering is all part of my schedule.

Camera trapping never ceases though, as the cameras are hard at work as well.

I've been back and forth to my new camera trap sets in Leesburg, Virginia.  It gets really windy on some of Leesburg's hills and small mountains.

Autumn olive chokes the forests in these parts.  Although it is an invasive species, autumn olive does provide a lot of cover, and one thing you want in a forested area when hiding a camera-trap, is a great amount of cover.

Poison ivy is around here as well.  I can see the hairy stems, the spreading roots, and old growth of the plants.   It hasn't even grown leaves yet this year,  but that didn't stop it from leaving rashes on my body for the better part of last week.  Of course, there is no telling exactly where I got the poison ivy from since a great deal of my work, walks, and research is done outdoors.

The point is, is that poison ivy is nasty, and will still affect you even when it doesn't have its infamous "leaves of three".  Boots, jeans, long sleeves, hiking gaiters, and a shower afterwards are all necessary.

The good news though is that I have deployed a whole army of new cameras out and they are heavily covered and hidden in poison ivy patches where autumn olive also lives.

One of my newest camera trap sets has been at a fresh den site.  This den has three openings and seems well used.  Me and a few other people familiar with the area were wondering if it was a fox den or a groundhog's den.  We agreed to put a camera up and find out.

Turns out that it was indeed a fox den.  A pretty lookin' feral cat also came by. 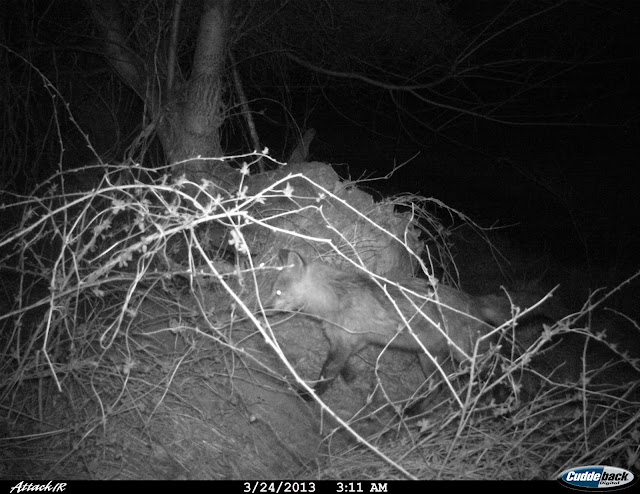 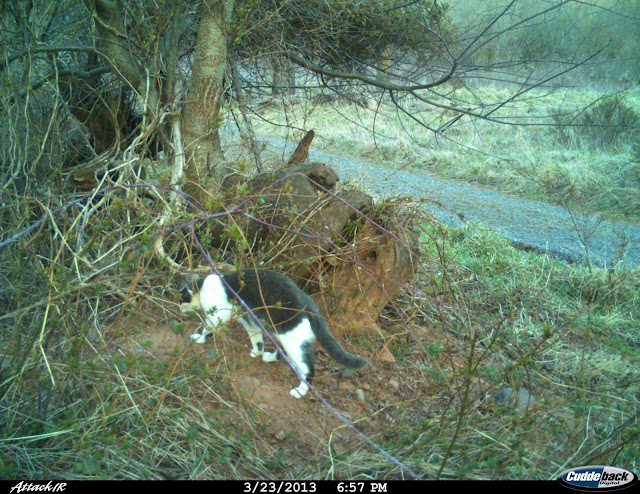 There is a ridiculous amount of coyote scat located on the trail adjacent to the den.  There is also fox scat around as well, but the coyote scat is dramatically different in size.  It should only be a matter of time before a coyote gets curious or wants to take a whiff of the smell of the fox den.  During that time, I hope to get a picture of a coyote on this camera.

Also around here are many bluebird birdhouses lining meadows so they were flying all around. I also spotted an American Kestrel perched on a wire, and many vultures waiting for their next carrion meal.  All in all, camera trapping has been going well this week even though I personally have been very busy.
Posted by Unknown at 10:13 PM