Sometimes in life, you just have to get away for an hour or two and not think about anything.   That's what I did yesterday on a short hike in Great Falls, Virginia.

I saw some good color in the trees and took a few pictures, just on my cell phone's camera though.  Enjoy! 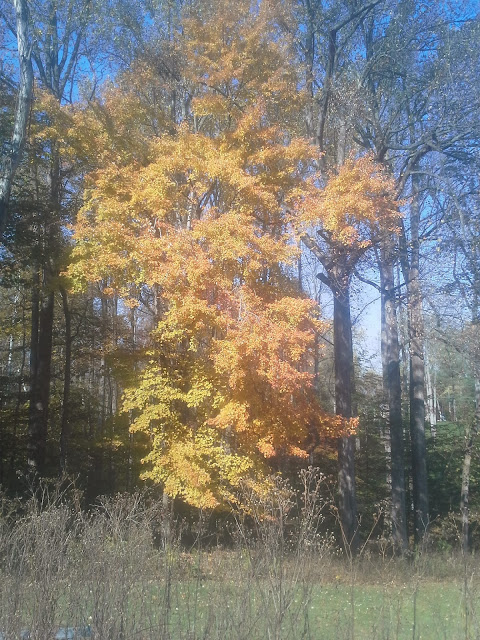 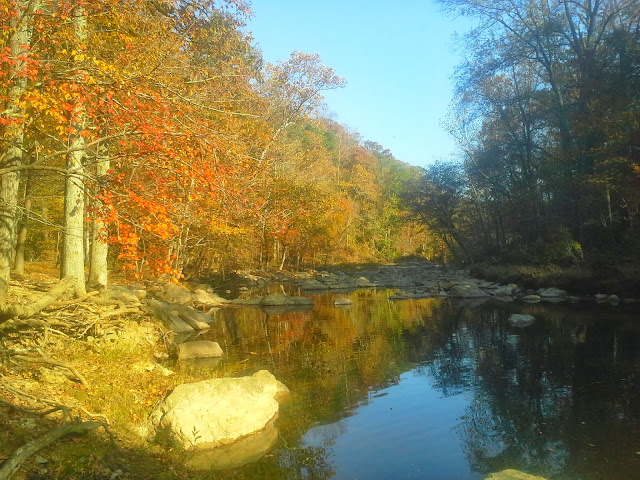 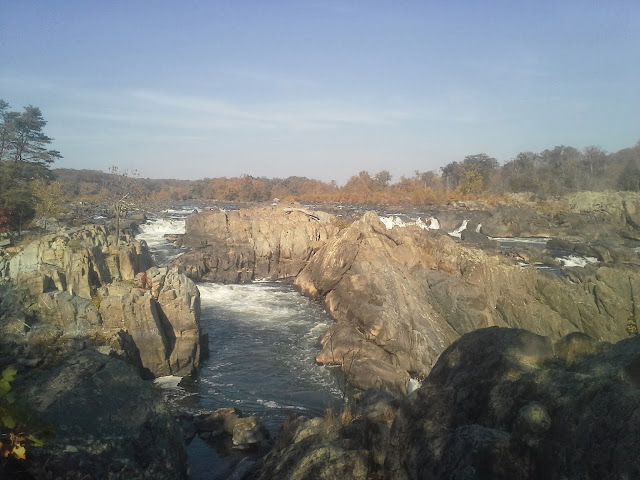 Pretty soon the leaves will be off the trees and my eyes looking for hawks, as hawks are very easy to see when perched on bare trees.
Posted by Unknown at 9:16 AM 1 comment:

At the beginning of the hunting season, I wasn't exactly sure if I should keep all cameras up or not, due to the fact that there would be an increase in human activity off-trail in the places where my cameras are.

I took a few down, a few did get stolen, and I moved some around.  Two of the cameras that I was using in Great Falls, Virginia were taken down and lent to a friend to take to two pieces of property in Fauquier County.

The locations she chose did not disappoint.  I posted images from one of the cameras in a previous post.  You can see that here:  No Shortage of Virginia Bucks .

Now it is time to reveal more photos of the wildlife of Fauquier County, Virginia.

More specifically, coyotes that roam in the night!

The first one is a bit blurry, as the coyote is moving quickly. 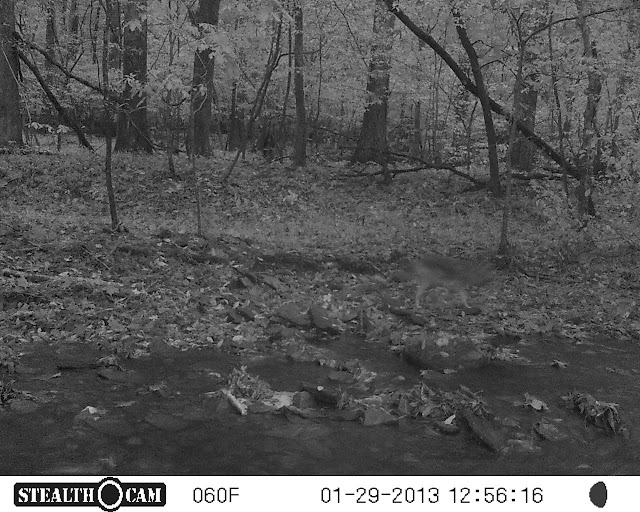 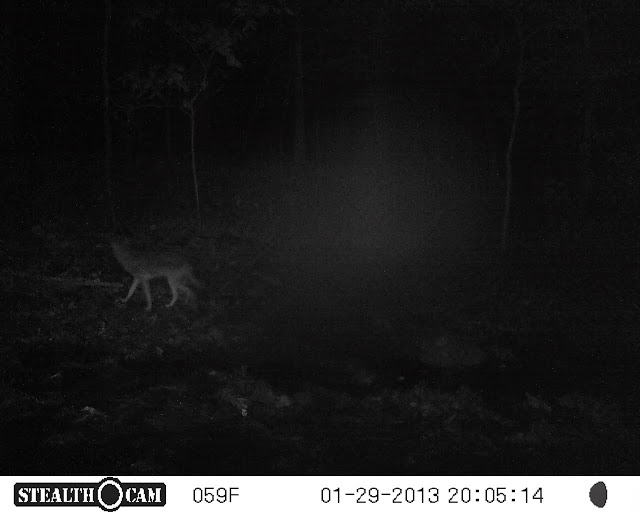 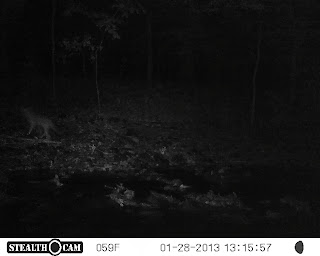 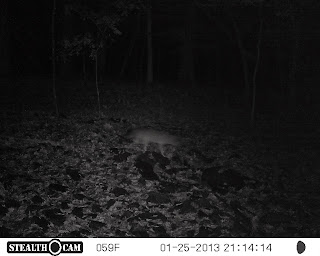 Someone recently asked me what the trick to seeing coyotes around here was, I told them to get a trail camera or to be up really early in the morning near coyote habitats (the edges of deep woods where the woods hits meadows, stream valleys, and large open meadows).

It seems like there is a lot more of those kinds of areas in Northern Virginia than people think.

We have the Capital Beltway which encircles the greater D.C. area, many housing developments, and a complete chaos of a rush-hour.

In all of that though, there really are many places where coyotes, bears, foxes, and birds dominate the area.  The local parks are some of the best places along with many private properties that are large open fields.

Most people that have contacted me about seeing coyotes get lucky and see them crossing a road early in the morning.

Coyotes have been seen all over, and I can confirm that there are many around.  If you want to see one in Northern Virginia, get out in these places, keep quiet, and be patient.

It's been a great year of camera-trapping.   That's right, on this date last year, I started putting up cameras in the woods.

The first real pictures I got were just of deer, but hey, those pictures were the start of something great.

Camera-trapping has taught me many things about everything.  With the ridiculous amounts of cameras that I now use, I have been able to write grants, receive grants, attain federal, state, and local permits regarding wildlife, and have been in magazines and newspapers.   I've also done a bit of community outreach by speaking in public schools about the importance of natural resource protection and the methods used to survey wildlife.

Another big part of this is the volunteers and helpers that come along with me, pulling SD cards out of cameras, jotting down notes, and helping with general camera-trap work.  There have been a whopping 38 volunteers who do this with me and I couldn't have done it all without them.

The best is yet to come.  Thanks for being a part of the excitement!

A Friend of White Legs

"We got white legs!!!!" was the text I received from another fellow camera-trapper in Great Falls, Virginia.  Excitement was evident.

We had in fact, camera-trapped White Legs, the red fox.  The saga continues!

This time, White Legs met up with a friend.  You can see another fox there in the background.  Could this be just a friendly meet up?  Or is one of the foxes a female, pushing our chances of fox kits up this upcoming spring? 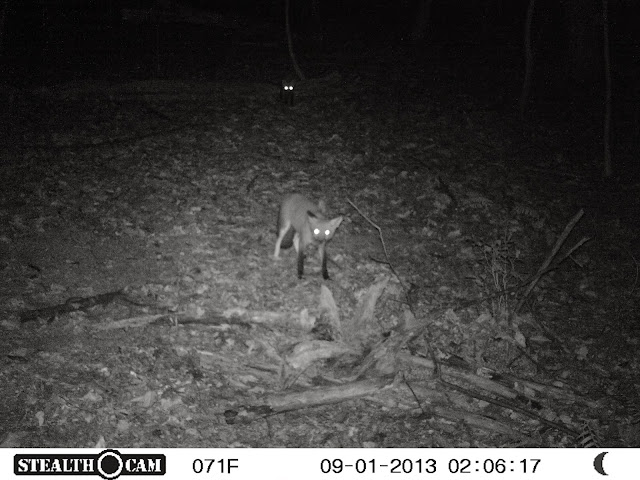 White Legs made a good amount of appearances at the camera this time.  Everyone seems to know and love this fox.

My co-workers enjoy the images, my volunteers and interns love checking the camera where it always seems to be, and the human neighbors just can't seem to get enough of White Legs.

Everyone is under strict orders not to feed this fox to see it.  It's illegal to feed foxes in Virginia anyway, but everyone around the home of White Legs still has gone through a 2 minute long speech on why they shouldn't feed it.

This one is one of my favorites so far. 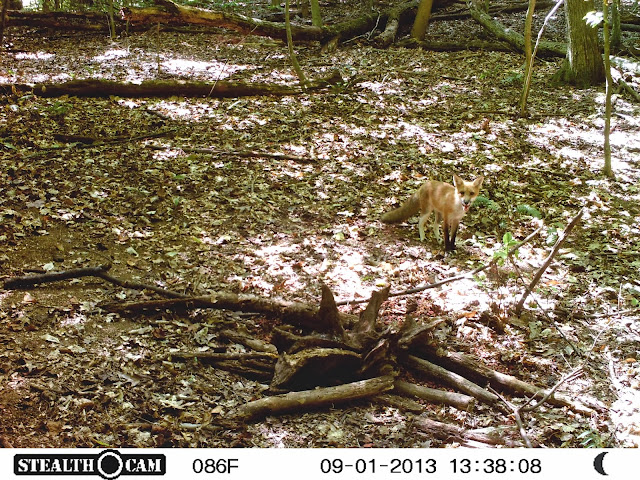 Enjoy your Friday, folks!
Posted by Unknown at 7:50 AM No comments:

It's a typical rainy, fall day here in northern Virginia.  I've been up all morning homeworking and getting things done.  Now, it's time to blog!

I've had a bit of time to catch up on viewing the camera-trap images from the past few months.

Here's one that's a bit tough.  This image comes from the town of Great Falls, Virginia. 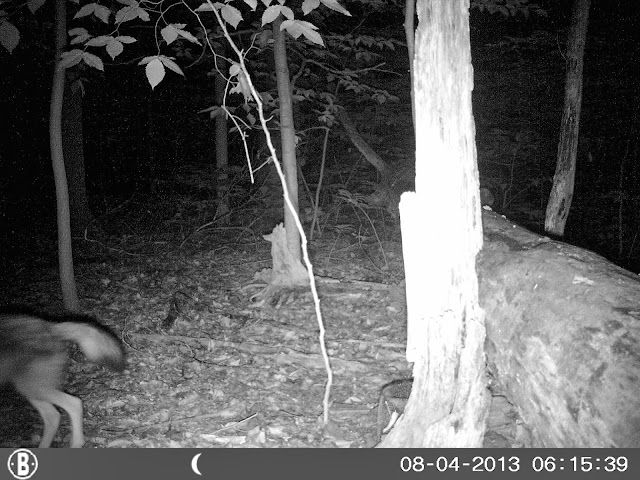 Here's an image of a raccoon in the same, general area.  Use this for the size comparison. 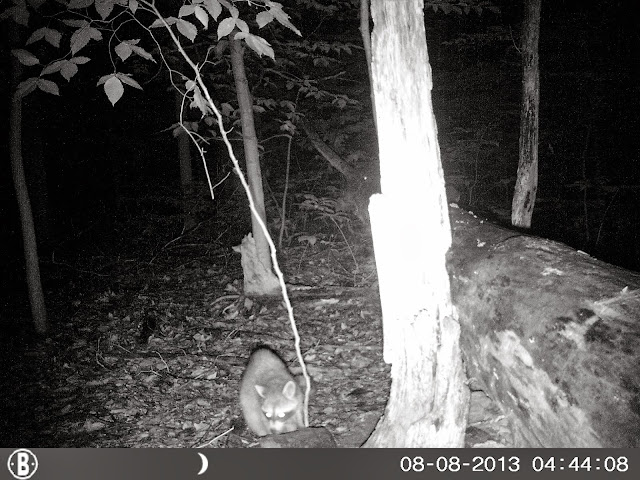 What do you think?

I'm pretty confident with my coyote answer, but I could be wrong.
Posted by Unknown at 10:21 AM 2 comments:

I've taken a few trips to see the barn owls in Leesburg in the past few weeks.

They don't get close enough for me to get a good picture, and will fly away as soon as I make eye contact with them.

I have taken a few friends to see the owls and to try to get good pictures of them, but even they have trouble with their DSLR cameras.

My camera-traps in the bottoms of these barns and silos have not gotten any pictures of the owls.  A new method will have to be found and thought of.

Let's get the gross facts out of the way first.  This log was a place for marking for many species of animals.   Fox, raccoon, and other unidentifiable mammalian scat was all over this log.  Animals do this to mark their own territory, and it really can just pile up after time.

I found it just by walking around the woods in Sterling, Virginia while doing a few wildlife surveys months ago.

So what was a nature-oriented person with multiple camera-traps going to do?

You guessed it, I put a camera up to it and left it out for months.  I checked it today and was happy with the results.  These are all videos and can be started by just clicking.