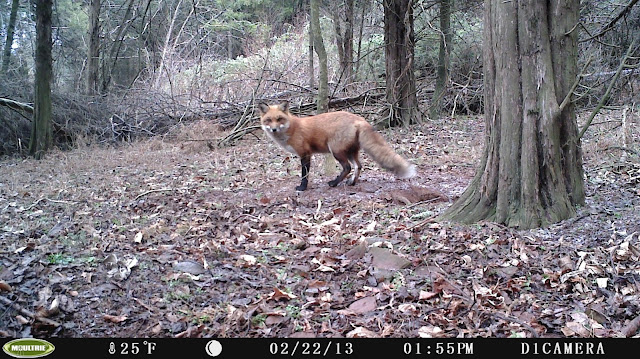 One of the fox dens that I have cameras at has seen some great action lately.  This camera is in Sterling, Va and is pointed at one of the openings of the den.

This den is a big one.  It contains a whole network of underground tunnels and 5 holes for entering and leaving.

There are fox kits in the area already, but I am unsure if this den houses any kits yet.  I have not seem them coming in or out of this den yet.

There have been many visitors to the den however, and excitement for more foxes continues. 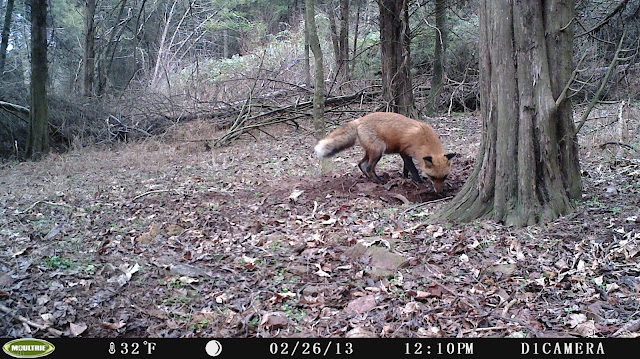 I was back at the otter den today with an extremely hopeful outlook.  It is wrong however to be so hopeful with camera trapping because these results are not always typical.

This otter den has not disappointed. Otters showed up on several occasions since I checked this camera last.  One thing to keep in mind is that the den has a few entrances, some on water and some on land.  This camera only faces one of the many entrances.

What do the multiple entrances have to do with camera trapping?  Well, my camera only points at one of the entrances.  Only a fraction of the otter movement in and out of the den shows up when one camera points at one land entrance.

The camera was set on its video mode so I included some videos as well as still images that I extracted from the videos. 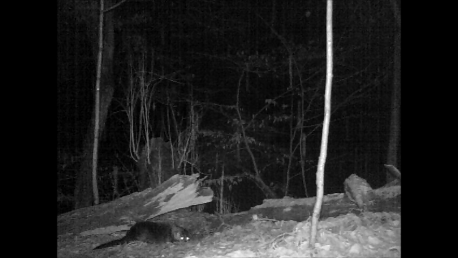 When the otters do show up though, they seem very photogenic.  They'll play and jump around in the camera's view.  A game of tag also took place during a few of the camera's recording moments.

Otters are known for their play.  If you visit an aquarium or zoo that has these animals, you know first-hand that otters chase each other on a daily basis.

The last video shows some otter chase or a good game of tag.


One of my main goals in creating this blog was to educate people on what kind of wildlife is actually in the area, could be in our area, and might be in their backyards.  It is so nice to see people asking questions and for them to be astonished on the fact that we have these animals here in the most northern parts of Virginia.

Arin Greenwood over at The Huffington Post contacted me a bit ago wanting more information on what exactly I do and what my experiences camera trapping have been.

I enjoyed reading her writing and was very happy with how it got more people involved with my blog and that they have hopefully learned a little more about what animals are lurking around them on a daily basis.

I wanted to write this blog post to personally thank her.  Thank you Arin for your passion and interest into the local wildlife and for wanting to know more about what exactly I do.

Also, in the world of camera trapping and wildlife, The Discovery News team recently published their, "Top 10 Wildlife Camera Trap Wildlife Photos".  I find these "Top #" lists very interesting and have seen similar ones from National Geographic and many other famous publications.

For more info and to view Discovery's own top 10, visit the link below.

My favorite image was the one of the chimpanzee peering into the camera.  I've had a few animals do the same thing, but can barely relate to the photo at all, as the areas that I camera trap in do not contain wild and native chimps.

A Short Story On A Heron

It was a few months ago while I was walking along the banks of the Potomac River when I heard a group of people making noises of awe, disgust, and even excitement.  I made my way over and saw the subjects of their gasping.

A great blue heron and a northern water snake were battling it out.  The heron had the snake skewered in its beak.  The snake was striking at the heron's neck and head, plucking feathers from it's blue-gray plummage.

I've seen snakes getting eaten by these birds many times in this park, but this was slightly different.  This snake was fairly large for a heron to be tackling.  It was a noisy, feathery, and somewhat bloody showdown.

The park patrons were asking me if I could do anything to stop the madness, but this was just nature playing out in front of our eyes and was happening about 30 yards away on a rock in the middle of the river.

I knew the snake would be eaten soon, but it struggled well.  It was speared, skewered, and waiting to die.  The heron was just waiting for it to tire out.

The madness ended just as I had expected it would:  the last inch of the snake's tail slid down the bird's beak like a strand of spaghetti.  The heron remains a great predator of the northern water snake.

Great Blue Herons are very large birds.  Their wingspans can measure over 6 feet in length and have beaks as long as a steak knife  Here are a few pictures of a heron that visited one of the camera traps that I had set out for a few days.  This was Waterfowl Cam #1, a camera set on a pond bank specifically for birds in water. 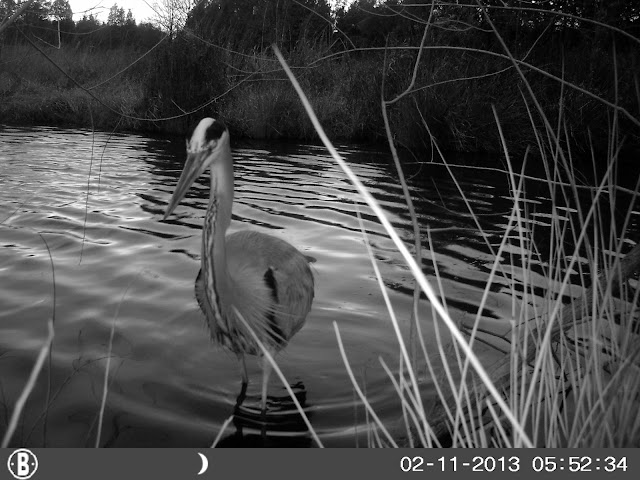 This is the resident heron that lives in two ponds.  It will sit in one pond for a few hours, picking the perfect spot to catch the perfect fish.  When it does, it gobbles it up quickly, then moves to the far side of another pond close by and works that pond the same way.

All day long, it goes back and forth to get its daily fill of seafood. 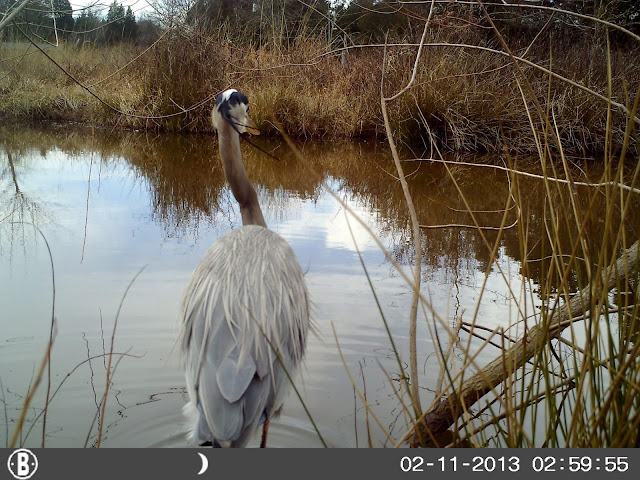 Why can't I get a good picture of a coyote coming out of or going inside this den? 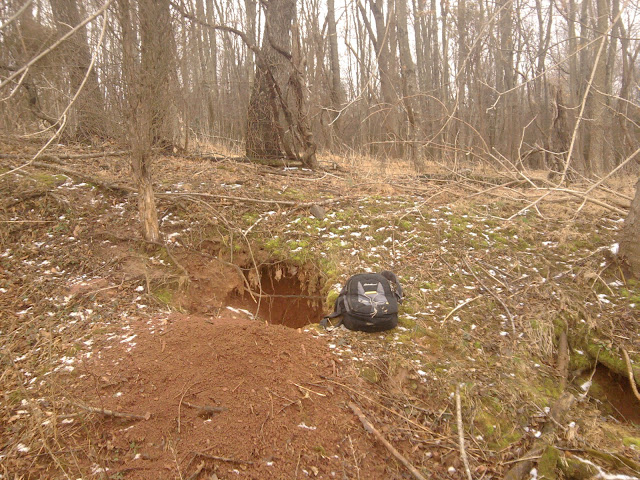 Is this an abnormally large fox den or is it a coyote den that is inactive?

I'm going to keep the location of this den a secret but I can assure you that it is located in Loudoun County, Virginia.

The hole, as you can see is bigger in diameter than my backpack is in width.  The smell of carrion meat and carnivore urine bleeds out of this den. 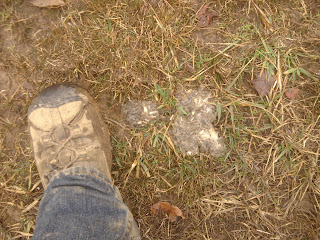 I hope to have some answers as to what really lives in here, in a few weeks.  I already wasn't thinking when I put my backpack around it as I left some of my scent there.  As I have learned with coyotes, any human scent left at the scene is too much scent.  Way too much scent.  But here's to wishful thinking that this site will bring some good results.

I'll leave you with a picture of week old, rained on, smushed coyote scat that I found near this location.

My muddy boot for size reference as I forgot to bring a tape measure.

Let's play a game called "Spot the Deer"
I promise you, there is a white-tailed deer in this photo.  Can you see it? 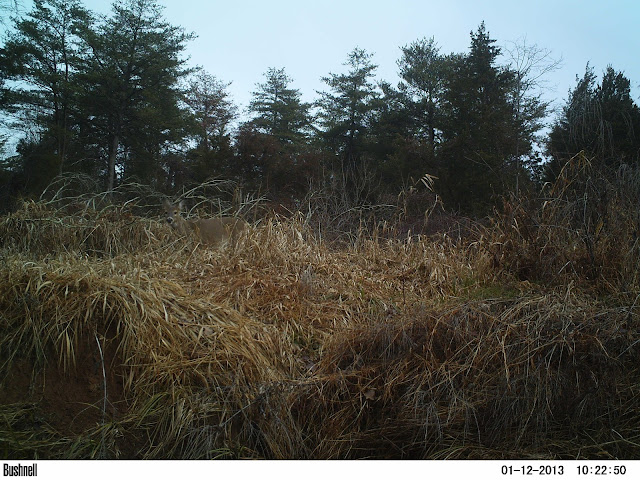 Told you there was one in the photo.

This was a camera trap set that I had recently put up to see what was in one a few small meadows that I visit.  It only stretches for a few acres but splitting right down the middle of it is a small creek.

This small creek was once damned up by beavers, creating a pond.  The pond built up and covered a small section of woods.  Trees in these woods got their roots rooted out, died, and that is how this small meadow in the middle of a forest was made.

Hint: If you're still stuck on trying to find it, it is staring right at you in the middle of the picture, slightly to the left.

I checked this spot almost daily for results so I did not expect anything too exciting due to the lingering human scent that I kept leaving.  A red fox (vulpes vulpes) made its way through though along with all the deer. 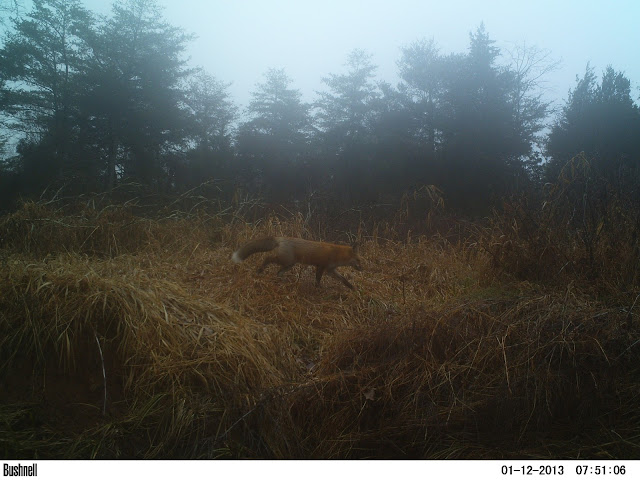 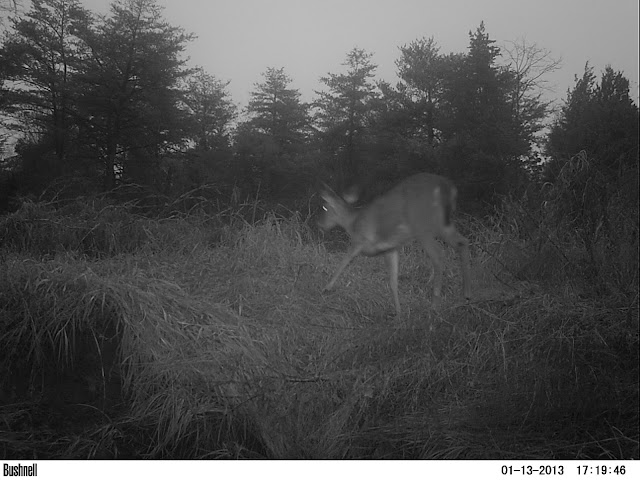 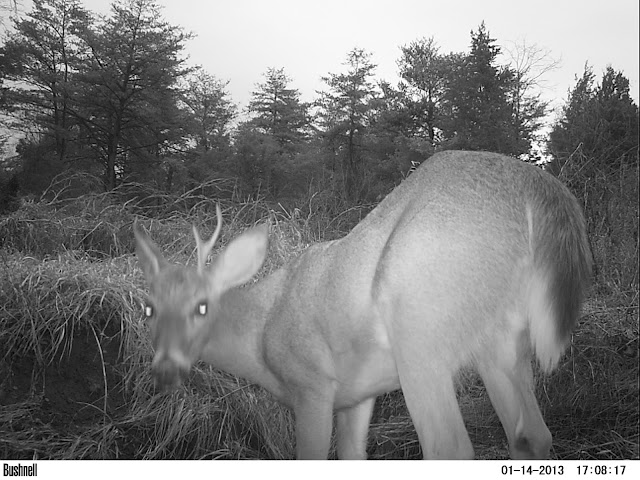 I got a little too close to the animal on this set, although, I did get some decent results.

An old, hollowed out tree was the scene.  It was a perfect ramshackle shack for a few resident raccoons. 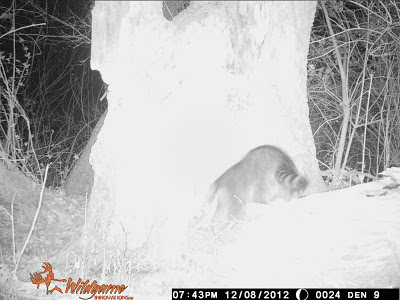 Here's a curious one.  That vertical tree right there is tough to see but it's very hollowed out.

The hole is at the bottom of the tree and goes up to a little above where the raccoon is in the picture.

I put another camera on the inside of the tree through this hole and had a pretty good idea that i would get some videos of raccoons messing with my camera.

I was correct in thinking this!

The raccoons not only played with my camera, but also gnawed on a chain that it was connected to, defecated on the entire camera, and tried to work open the small padlock on it.

Here is what a "Coon Closeup" looks like from inside their home.
I'm not going to show you any video of a pooping raccoon, so you'll have to visualize that yourself if you want to.

But anyway, here is another video of one wondering why there is a camera in its home.

I took the cameras down from this set a bit ago until I can find out a better way to diffuse the infrared flashes.   I could also try to move the camera from the inside to make it higher, so that the raccoons are farther away from it.

Either way, it wasn't a terrible set for camera trapping and I was glad to prove to myself that there were in fact, raccoons living in this tree.


When there is no human supervision in an old, abandoned building, who would you expect to come in and party?

If you guessed rats, mice, and raccoons, then you are correct.  However, you are only beginning to touch the tip of the iceberg that is the full answer.

See what critters came into an old building that I put a camera into a few weeks ago by scrolling below.


I was surprised at the amount of animals that came in, and I was really only expecting rats, mice, and raccoons.

There’s still an incredible amount of hope that I have, that I will get a picture of a resident owl swooping down to catch a squirrel or mouse in the same frame as these other animals.  That kind of picture inside a building is going to take a lot more patience on my part.

But hey, these results were way better than I expected for a small, old building.