People hardly believe they are in our area, but there are many tales (bobbed tales!) of these extremely well hidden creatures roaming the suburbs.  So let's finally break this one down for all the Northern VA suburbanites out there.

Yes, we do have native bobcats roaming Loudoun, Fairfax, and Prince William Counties.  They are not something to fear, but more of something to be aware of.  I've seen them on multiple outings while wildlifin' around the area.  Sterling, Leesburg, Bluemont, McLean, Great Falls, Haymarket, Manassas, and Falls Church are all places where I've either seen them in person or on trail cameras.

Bobcats are predators, but will most likely leave your pets alone.  They feast on rabbits, birds, snakes, moles, mice, shrews, and other small meals.  I've seen a family of bobcats raiding a trash dumpster outside of a business right next to a major highway in Fairfax County.  There have been some roadkilled ones as well.  Great Falls had two roadkilled (that I know of) just in the past 3 months.  There have been roadkills on Kirby Road near McLean, Virginia a few times in the past two years, and I've even heard about one killed on the road on Fairfax County Parkway.

So where's the pictures?

These are brought to you from the Centreville/Haymarket area with permissions from other camera owners and my own cameras. 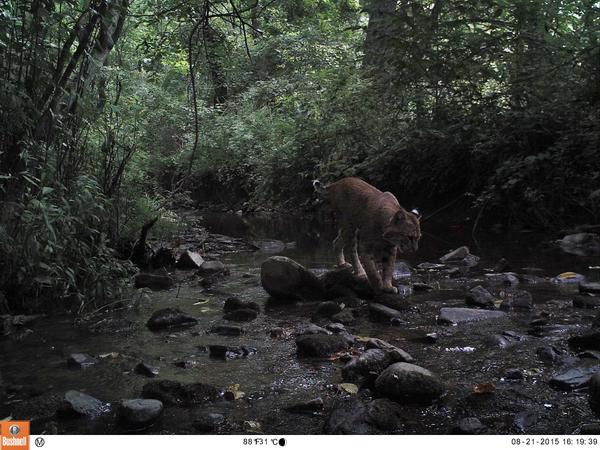 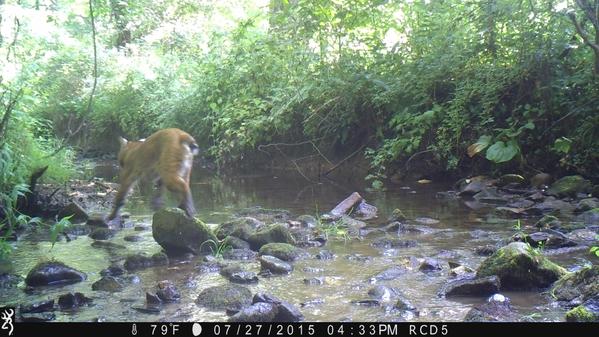 Have you ever seen a bobcat in Northern Virginia?  Comment here and let me know!
Posted by Unknown at 11:32 AM 11 comments:

Green With a Hint of Black Bear

We were both patient with each other (and ourselves).

He snorted a few times, probably saying "Human, let me do my thing!".  So I listened, and respected him, just as he did to me.

We didn't provoke each other.  Yelling, running, and bluffing was not necessary.

The animal really only wanted some acorns in the tops of the trees, just as most bears in the area are doing right now in the year.  They're getting some extra calories, as it is still fairly hot during the day, and they know that winter will be here before long.
Posted by Unknown at 3:09 PM No comments:

It's been one good summer, and to make it even better, I've had TONS of great animal sightings in its last few weeks.

Among these are a few coyotes, some bobcats, lots of bears, and even venomous snakes. 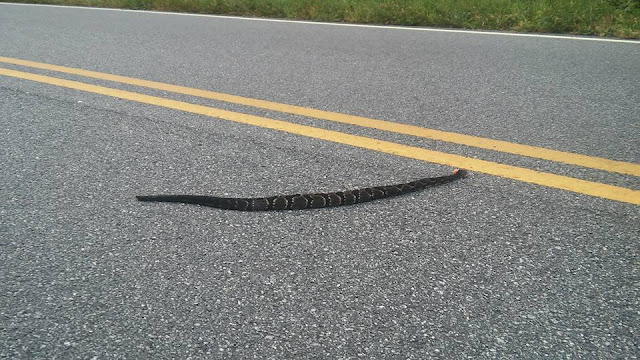 I saw this Eastern Timber Rattlesnake in the Shenandoah mountains last weekend.  These ones will put a hurtin' on you if they bite you, but from the stories I've heard from this area, they will usually give you the rattle sound as a warning before they strike.  Who knows though?  I sure haven't bothered any enough to find out.

It was good to keep a safe distance and not touch it, even though it looked pretty dead to me.

This other one is a venomous copperhead from Fairfax County.  Copperheads are some of my favorite snakes, and though their bite can easily hospitalize a human adult, I still try to get a few pictures of both live and dead ones. 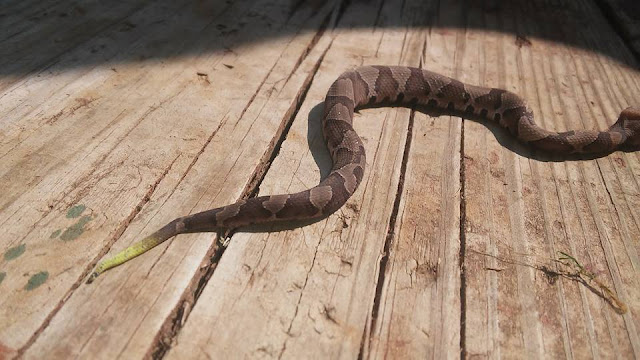 I tried to highlight and focus on both the interesting pattern on the copperhead, as well as the bright yellow-green tail.   That yellow tail is a good indicator that this one is a juvenile.

Juvenile copperheads almost always have this feature, and is used as a caudal lure, luring prey to them when they wiggle it back and forth.

They are fascinating.  Even if I try to get a few pictures of a live one, I always look directly at the animal and try not to disturb it.

I don't kill these snakes, as they are just part of the nature around here, plus they are almost always seen by me in protected natural areas.

Venomous snakes are not something that should be "fooled" with.  They can kill you.  Though it is rare in the area that this happens, it still is possible, and knowing what venomous snakes look like can be very helpful in places where they are commonly found (parks, river banks, rocky outcroppings, woodpiles).  These snakes should not be feared, but people should be aware of where they most likely are going to be, what to do if you get bit, and more importantly, to not pick them up.
Posted by Unknown at 3:21 PM No comments: