Putting the terms "bear" and "Northern Virginia" in the same sentence always seems to stir people up.  It's really not at all what I intend to do, in fact, I would really prefer to do the exact opposite.

Like something out of a horror story, some people around here are absolutely terrified by black bears.  Other people are in shock to hear about them roaming around suburban neighborhoods in Loudoun and Fairfax counties.  There's a whole mix of emotions that come into play, and people sometimes come to me to ask what emotion they "are supposed to have" or how they should react.

I find the interest and intent that people have with their native and local black bears absolutely fascinating.

There a tons of wildlife agencies that may possibly handle, talk to you about, or give advice on what to do if you see a black bear, and for the protection of my jobs and my sanity, I will not be going into much detail here about those organizations.

What I will do though, is provide you with information about some bears that I've seen.  I'll show you pictures and tell you cool stories, and immerse you into the world of northern Virginia's largest living mammals.  I'll do this on this blog post, and more in the future.

Let's first look into a common question that people have for me; the question: "Where are the black bears around here?"

My answer:  "All over the place, as they can be anywhere and everywhere and have very large territories as compared to other local mammals"

Seriously though, I've seen black bear sign (scat, tracks, fur, and/or actual sightings) in every northern Virginia county that you could think of.

One of the most interesting bear tracking episodes came out of Loudoun County, Virginia this past winter.  A bear was seen multiple times on private properties, crossing traffic, and really all over the place.  I'll keep the exact locations to myself for now, but this bear had a very specific territory in mind.   I spent a good amount of my spare time tracking it through woods and fields, and even managed to see it a few times.  One day, I followed the tracks for over 3 hours, and even then, there was no end to its walking in sight.  The tracks lead to and were on top of large fallen logs, across streams, onto an icy pond, straight over barbed wire, and even into a bedding area where it probably stayed during that same day.

To put it simply, this bear seemed to have almost no problem going over and across all these obstacles, as the gait in the tracks seemed to almost always be consistent over short distances.  In the long run though, I could tell where it "picked up" its pace and almost did a galloping-like motion and could also tell when it got near potential food sources, as it would stand on its hind legs, walk a few steps, then go back down to all fours.  I think that it did this as if it was smelling the air more closely each time it neared a garbage can or bird feeder.  Bears will often stand on their hind legs to get a better look at something with their eyes and to hone their sense of smell when their nose is a few feet higher when standing.


So with all this information in mind, I'll lead everyone to another common question that people ask me:  "If you can't feed black bears in Virginia legally, then how do you get them to come near the camera?".

This question has tons of answers, none of which lead me to feeding black bears.  A really good way of getting bears on camera trap is to just get lucky and have one walk in the field of view of the camera.  It's kind of an answer that most people who camera trap do not want to hear, but it really does work if you put out enough trail cameras or have a lot of patience.

Another answer to that question might be to set up a camera trap where other animals are living and eating.  For example, a recent camera trap bear sighting around here came from this incidental capture.  The camera was actually pointed at a tree to see what woodpeckers would come near the freshly carved woodpecker holes, and boy did the woodpeckers arrive.  Though, a bear did too. 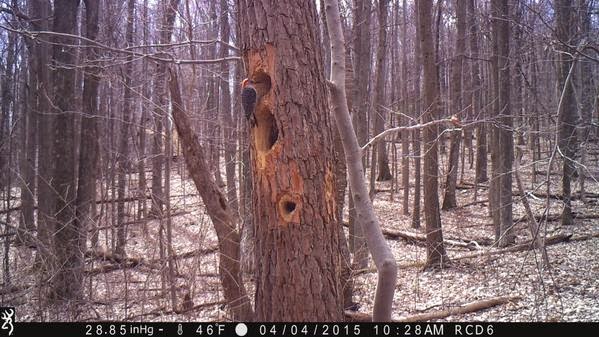 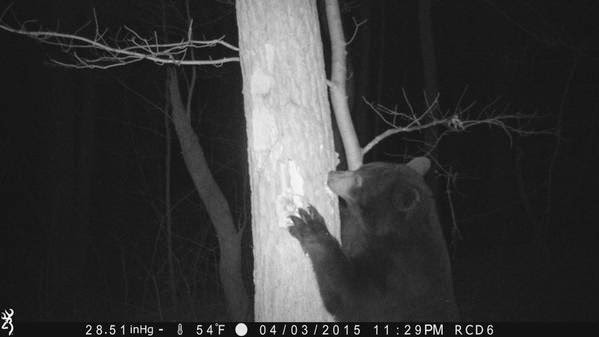 It's almost like the bear could have been targeting this tree just because the woodpecker might have had success in getting insects out of the tree too.  Do black bears know to specifically seek out fresh woodpecker sign so they can also get a bite of insects?  I'm not sure about that one, but hope to find the answer sometime.

If you ever see a bear or bear sign in northern Virginia, I would like to know.  It could really help me track these carnivores better, and ultimately might even give me some basis on making a more accurate estimate of the black bear population in these counties.

What I would really like to do next year, is do a large camera trap survey just on black bear dens.  I've heard rumors and know of a few in the area that are actually confirmed by various biologists, but would like to expand on what most people (me included) already know.

I'm looking for holes in trees that could easily fit a person, brush piles where you think a bear could be, old barns where a bear has gotten into, and of course, any place where you have actually seen a bear sleeping.  Even though it is months in advance, I would still like to know.

Please and thank you!
Posted by Unknown at 11:47 PM